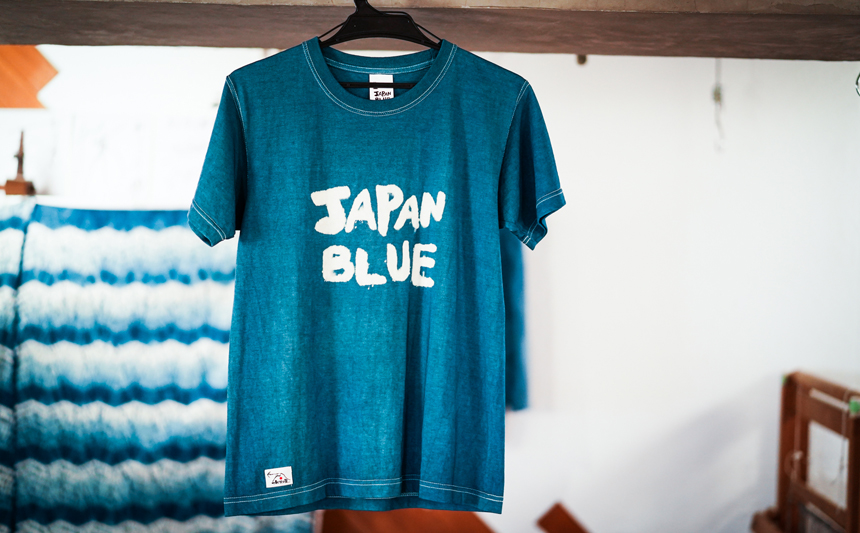 Despite the fact that the majority of indigo dyes used today are synthetic, some Japanese brands produce unique blue denims that are dyed in natural Ai Zome to satisfy denim-heads for their authenticity.

History of Ai Zome
Ai Zome is a traditional hand-dyeing method using Persicaria tinctoria, a plant more commonly known as Japanese Indigo. It has been used throughout Japanese history to dye Kimono and other local garments. “Ai” mainly refers to the blue created by the dye, but is also a nod to the leaves of the plants. “Zome” translates to “dyeing” in Japanese. This unique color extraction method was first introduced into Japan from China in the 700’s. Due to the heavy volumes of clean water needed for this process, Ai Zome spread through towns located near clean rivers. By the 1500’s, the government of Tokushima, a city in the Shikoku island located in the south west of Japan, was the top producer of Ai Zome garments in Japan. However, in the early 1900’s, artificial indigo was introduced into Japan, and popularity of the time-consuming Ai Zome started to decline. Especially during the World Wars, the production of Japanese Indigo came to a halt due to the governmental policy to convert its fields to vegetation. With this drastic change, the industry was almost wiped out entirely. Thanks to a small group of the craftsmen in Tokushima, however, the tradition is still protected and inherited today. 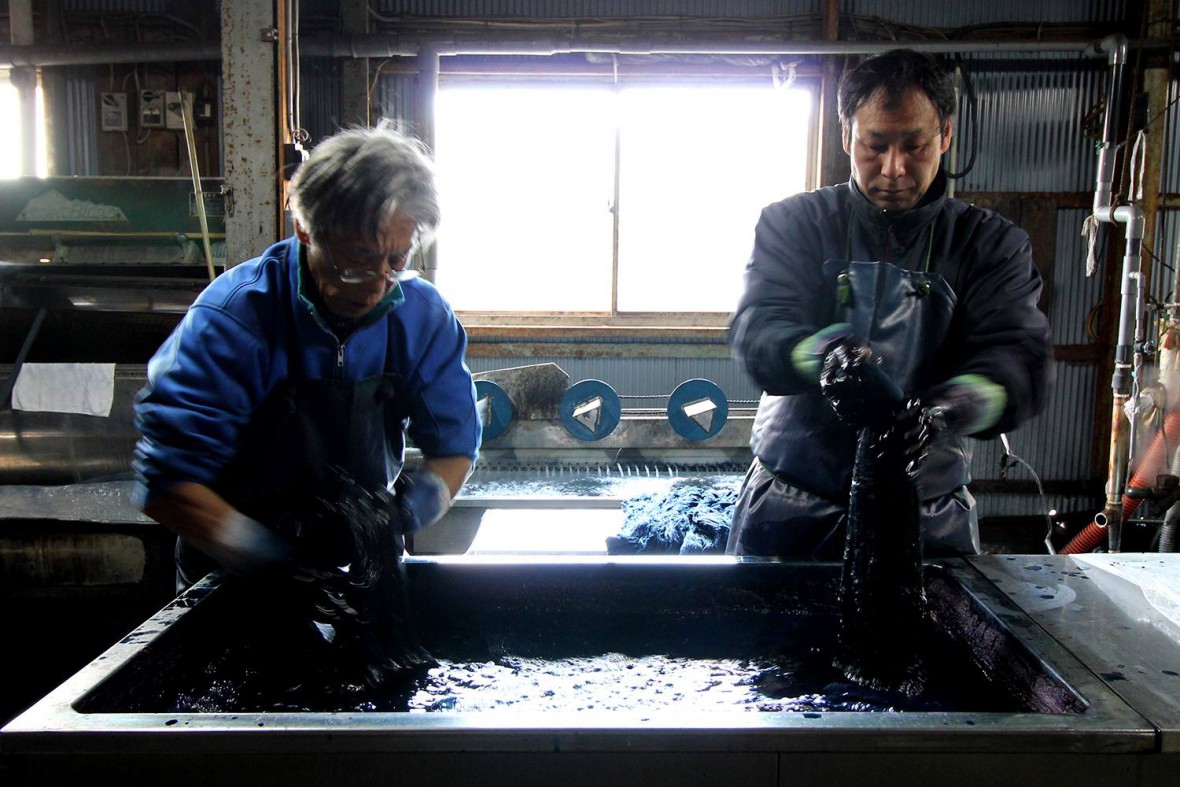 The hue of blue is also controlled by the liquid that is created by fermenting Sukumo (dried Persicaria tinctoria leaves) in sake and lye. The more mature the Sukumo, the deeper the blue; though, if fermented too much, the Sukumo begins to rot. The challenge is finding the perfect balance of maturity, which can only be attained through years of practice. As you can see, Ai Zome takes much effort and time. In return, it has many positive effects on people and the Earth. For example, clothing made of Ai Zome cotton is well breathable and cool in the summer, while at the same time it keeps the body warm in winter. The chemical-free dye is very gentle on the skin and is also environmentally-friendly.

Ai Zome Jeans
The first jeans made of Ai Zome yarn was produced in the 1960’s by Takahata Sewing under its denim brand EIGHT-G. It also was the very first made-in-Japan pairs of jeans. Today, after 60 years since its invention, Ai Zome denim attracts denim-heads around the world with its unique tone of blue, rarity and environmentally-friendliness. Especially SD-DO3 from STUDIO D’ARTISAN and AI-001 from pure blue japan are the masterpieces of Ai Zome Jeans. 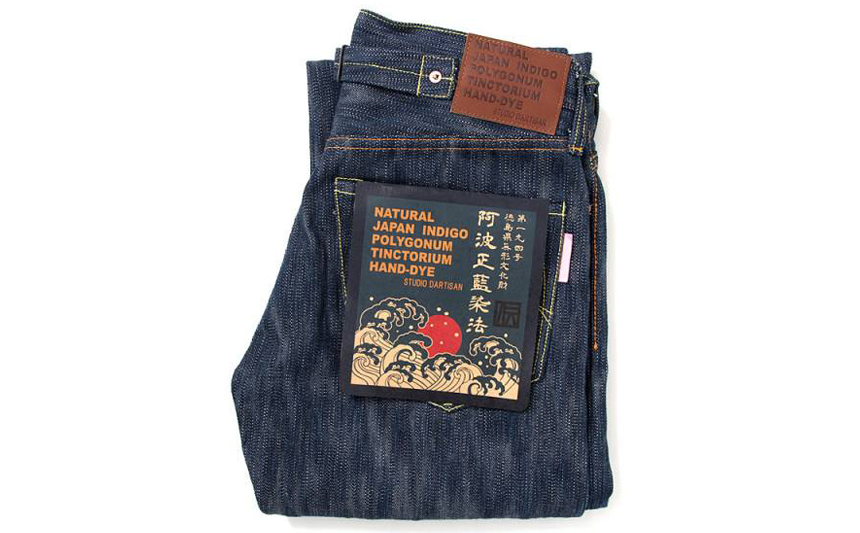 Ai Zome Experience in Tokyo
Now, you may be wondering what the process actually looks like. Don’t worry, you can have an Ai Zome experience right here in Tokyo. Ai master Masato Kikuchi opened his Ai Zome workshop Wanariya in 2012 in Tokyo’s cultural destination, Asakusa, to introduce the declining Japanese technique to the world. The former App engineer jumped into the world to preserve his grandmother’s professional Ai Zome skills. 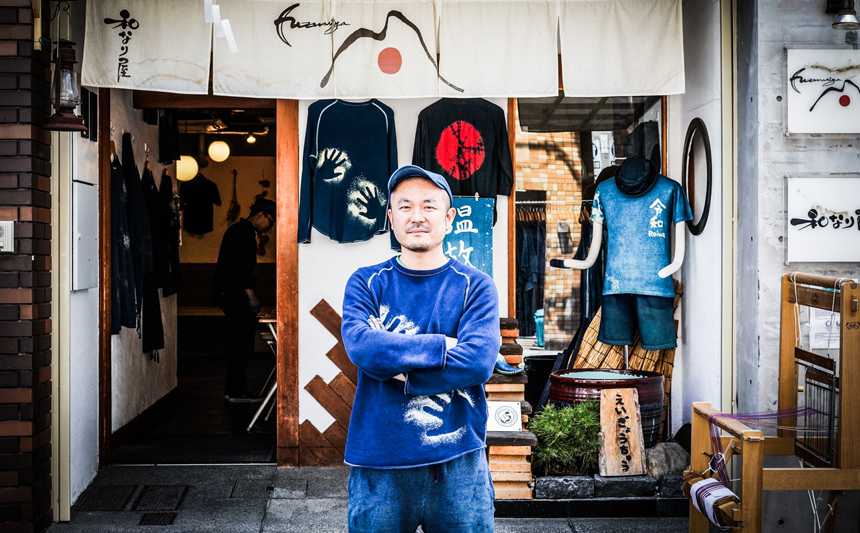 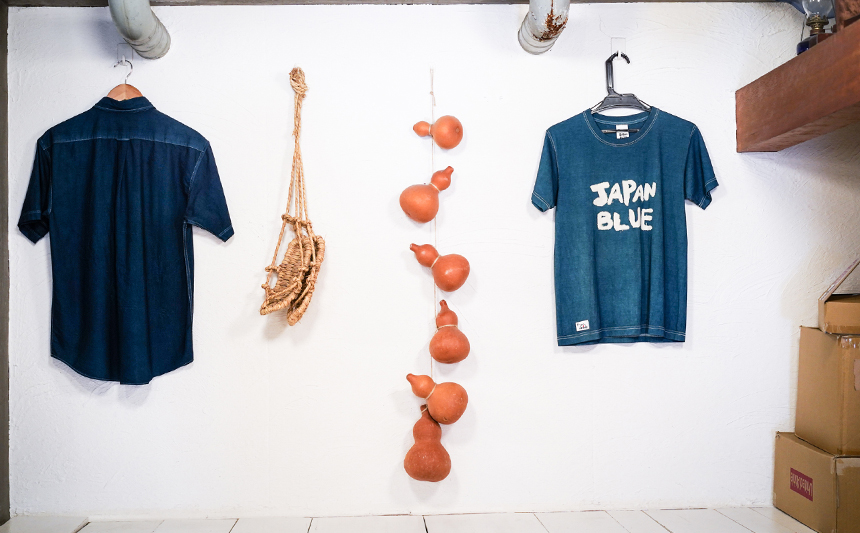 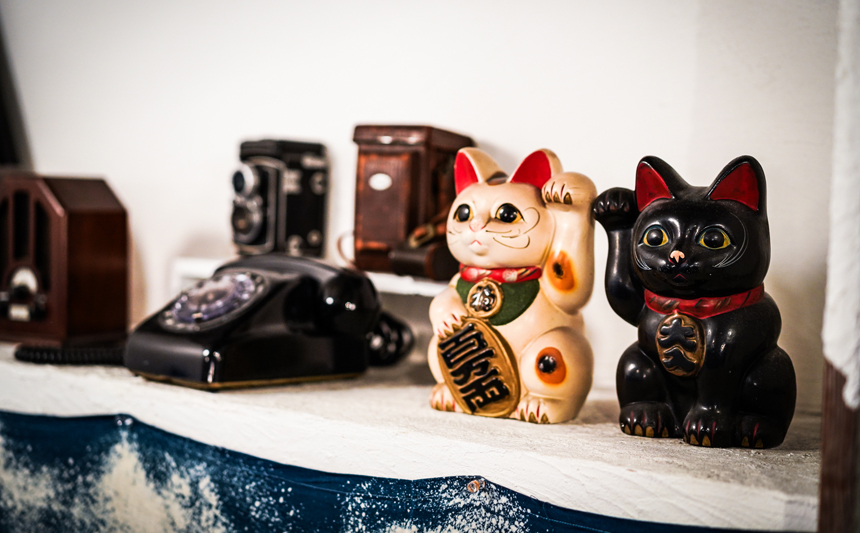 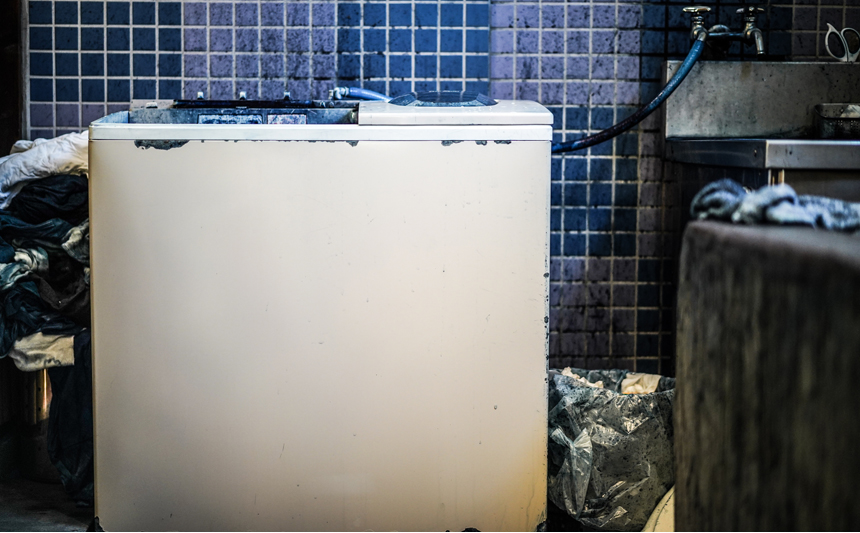 Kikuchi buys organic Ai leaves that are grown in his hometown located just outside of Tokyo and sends them to all the way to Tokushima where his Ai-shi (Sukumo producer) ferments them to make Sukumo. 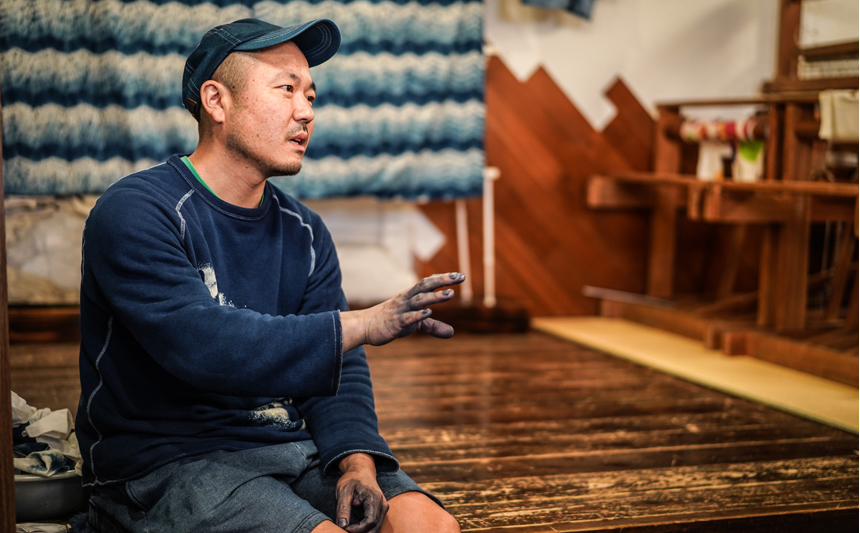 Once Sukumo is delivered to Wanariya, it is mixed with Sake and lye to produce pots of dye liquid. It needs to be kept fresh maintaining its pH between 10 and 12. If its pH is less than 10, it starts to rot. If its pH is greater than 12, the bacteria stops the dyeing process. 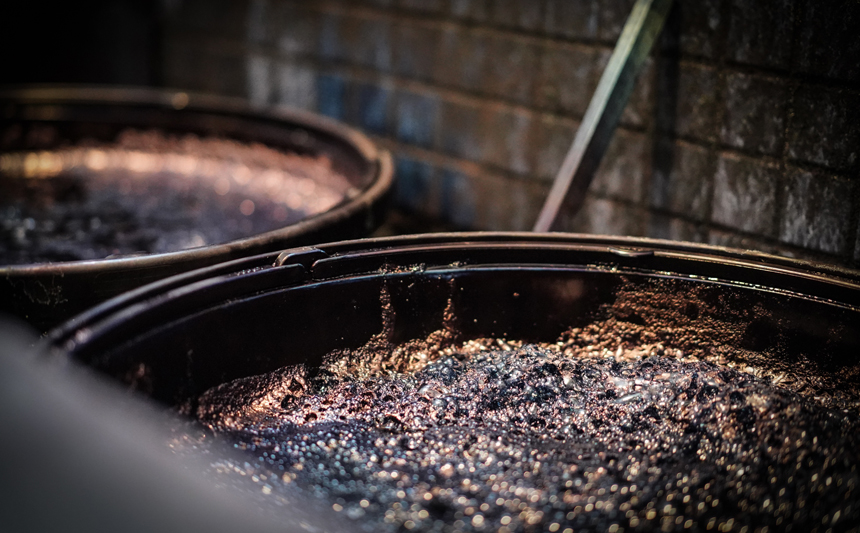 In order to experience the dyeing experience, you can buy items like T-shirts, towels and bags at Wanariya or bring your own garments.
First, it is pre-washed well to get rid of protein attached on the fabric. 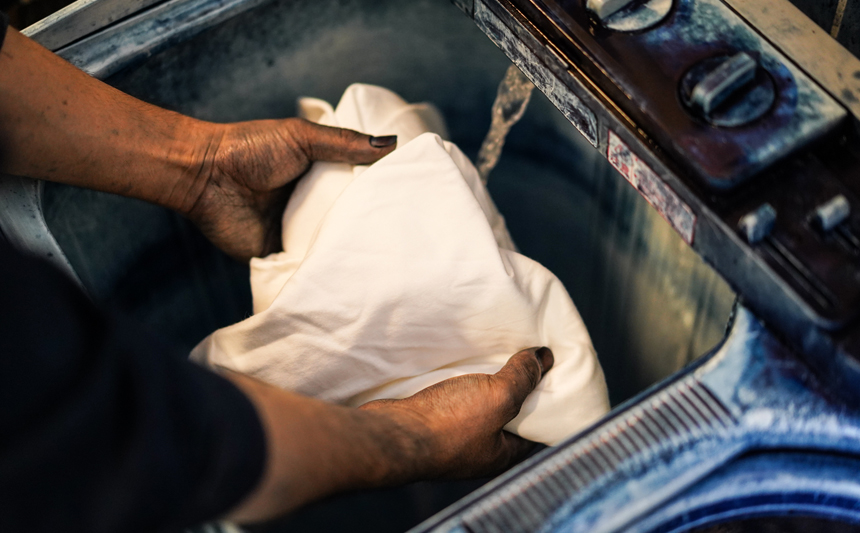 Second, you dip it in the pot, rub it well for a few seconds, and take it out. The color looks dark green at first, however, once the Sukumo soaked in it is oxidized by the liquid being squeezed out, the color mystically turns a beautiful Ai blue. The more times this process is repeated, the stronger the hue of blue. Each of the blue has a name. This time, the T-shirts below T-shirts were dyed 1 to 4 times. These Ai colors are called Nando (Left), Shibuai (Middle Left), Kachiiro (Middle Right) and Shikon (Right). 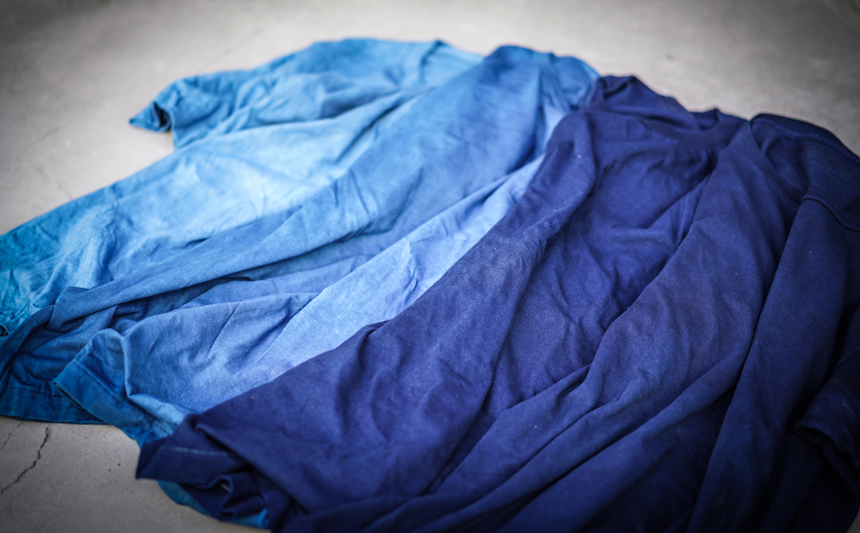 After you obtain the blue you would like, it is de-alkalized in vinegar to settle the color. Finally, it is rinsed and dewatered for you to take home and dry in the shade for a day. Try the rare Ai Zome experience at Wanariya when you are in Tokyo. If your denims are too faded, you can also take them to re-dye to bring life back to your beloved pair.

This article is also available at Heddles.